What is the modern 'power suit' of today? We, here at Buro. Singapore, believe that fashion is transformative — not only visually but also mentally and emotionally. The idea that a well-fitted suit instantly elevates the psyche and boosts one’s confidence is not mere happenstance. Part of it has to do with how it’s been ingrained in society that a suit is representative of elegance and in some cases, success and power. And the other part of it, is our collective social-conditioning that imbues feelings of confidence when wearing a suit.

The idea of the ‘power suit’ was credited to Chanel’s now-iconic tweed skirt-jacket combination. Although the invention of the suiting for women were already in effect in the 19th century, it was Coco Chanel that modernised it to adapt to the changing lifestyles of women in the ’20s. As these women took on more ‘masculine’ roles as they entered the workforce post-World War I, the suit became a symbol of professionalism while still exuding femininity and comfort. 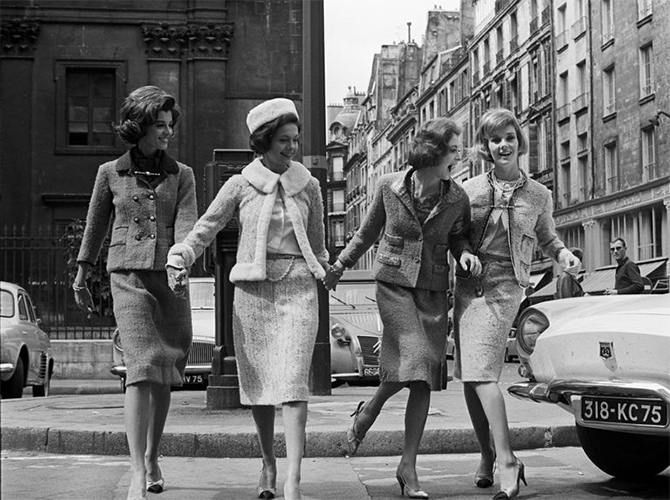 It was here that the term ‘power dressing’ began. Or simply put, the advent of the ‘power suit’. And of course, it’s a term that started because women had to ensure that they looked like they could go head-to-head with men in the same line of work. At a time where gender equality was not something that’s a common belief, women had to show that they could and should be taken seriously, as much as their male counterparts were.

The power suit then evolved to visually alter the physicality of women. Power shoulders crafted with padding allowed women to have the illusion of ‘strong’ shoulders, while trousers were cut such that they elongated the frame so that women appeared taller. And the cuts were designed to hide the body. Basically, anything that a woman could do to hide her ‘stature’ so that she could be just like one of the boys, the power suit did just that.

While we do have to acknowledge that the power suit is not just a female style trope — a man’s version is more nuanced and has more to do with accessories and quality than a single garment — it’s invention was designed to make women feel and been seen as powerful in society. It then begs the question of how the power suit has evolved in our modern world, now that the idea of gender equality is pretty much prevalent in society and with dressing having undergone a sort of more casual slant in the past 10 years. Women now feel more empowered than ever with glass ceilings being broken across various industries and communities the world over.

There is simply no one answer to what the modern power suit is. There still exists the notion of a ‘power suit’ — a suit jacket and trousers or skirt — that’s still relevant in many industries, especially in the more corporate sectors. But that has got to do with prevailing dress codes more than anything. Professionalism still reigns supreme and there’s nothing more professional-looking than a well-tailored suit whether you’re a man or a woman.

At the same time, the term is no longer just restricted to suiting and tailoring. A quick look at some of the most powerful women in the world and you’d easily notice a stark way of dressing: a dress; or the power dress if you’re so inclined. From Oprah Winfrey to former US First Lady Michelle Obama to even Vogue‘s Anna Wintour, a shift dress has become part of a woman’s arsenal to exude confidence and authority while celebrating her own physicality.

In an interview with The Wall Street Journal, fashion designer Zac Posen says it best: “A power dress has a sense of poise to it. It can go from day to night, makes you feel confident, and allows you to take ownership of your femininity.”

Michelle Obama is a fine example of how the power dress is used to full effect; bare arms and all. The former First Lady exuded class and elegance during public appearances, often opting for dresses that graze just below the knee while still exuding confidence and professionalism of what her role in public office entailed. And of course, that also came with stylish moments and became a blueprint of what professional dressing is till today in workplaces where dress codes are enforced but with enough room such that a woman is still allowed to celebrate her femininity. At the other end of the spectrum, the idea of power dressing goes beyond any single particular garment. It’s what gives you confidence and makes you feel authoritative. It could be a jacket, a pair of high-waisted trousers, a full skirt, or even a crisp white shirt. Whatever you connect being most yourself and confident — and of course, in line with workplace dress codes — is power dressing. It could even be a signature look the likes of the late Steve Jobs’s combo of a black turtleneck, denim jeans and New Balance sneakers, or even US vice president Kamala Harris’s suited up look paired with a tee and a string of pearls around her neck.

The ‘power suit’ has evolved to no longer be a garment to give the illusion that you’re just like one of the boys, but one where individuality is highly celebrated. Because why be like any Tom, Dick or Harry when what probably got you hired in the first place is the knowledge and expertise that you possess? That in itself is true power; everything else is secondary. But if you do need a confidence to assert your authority, it’s simply any piece of clothing and accessory that you make it out to be.